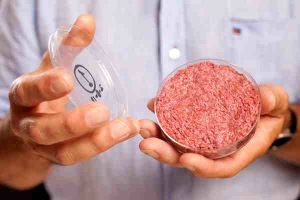 Personally speaking, I haven’t quite made sense of this yet. I can see the benefits of course for sustainability, but its a fine line between science & frankenfood.

This is a recent article published by the NY Times….

A hamburger made from cow muscle grown in a laboratory was fried, served and eaten in London on Monday in an odd demonstration of one view of the future of food.

“Those who decry it as ‘frankenfood’ might consider that food animals are essentially treated as production units.”

According to the three people who ate it, the burger was dry and a bit lacking in flavor. One taster, Josh Schonwald, a Chicago-based author of a book on the future of food, said “the bite feels like a conventional hamburger” but that the meat tasted “like an animal-protein cake.”

But taste and texture were largely beside the point: The event, arranged by a public relations firm and broadcast live on the Web, was meant to make a case that so-called in vitro, or cultured, meat deserves additional financing and research. Proponents of the idea, including Dr. Mark Post, the Dutch researcher who created the hamburger at the University of Maastricht, say that lab-made meat could provide high-quality protein for the world’s growing population while avoiding most of the environmental and animal-welfare issues related to conventional livestock production.

Neil Stephens, a social scientist at Cardiff University in Wales who has studied the development of cultured meat and who attended the tasting, said the event generated a lot of interest. “The exciting thing will be to see the response,” he said.

Dr. Post, one of a handful of scientists working in the field, said there was still much research to be done and that it would probably take 10 years or more before cultured meat was commercially viable. Reducing costs is one major issue — he estimated that if production could be scaled up, cultured beef made as this one burger was made would cost more than $30 a pound.

The two-year project to make the one burger, plus extra tissue for testing, cost $325,000. On Monday it was revealed that Sergey Brin, one of the founders of Google, paid for the project. Dr. Post said Mr. Brin got involved because “he basically shares the same concerns about the sustainability of meat production and animal welfare.”

The meat was produced using stem cells — basic cells that can turn into tissue-specific cells — from cow shoulder muscle from a slaughterhouse. The cells were multiplied in a nutrient solution and put into small petri dishes, where they became muscle cells and formed tiny strips of muscle fiber. About 20,000 strips were used to make the five-ounce burger, which contained breadcrumbs, salt, and some natural colorings as well.

For more of the story please go to:

FLUORIDE AND BOTTLED WATER: Which Brands are Safe

City Boy Bakes may be the BEST darn GlutenFree Cookies Ever!

Can I really have GlutenFree Spanakopita?

10 Celiac Disease Facts You Should Know

Meet Britt Reid – Gluten not only Attacked his Body, but Consumed it

Is Your Brain Getting Enough of the Right Sugar?

FLUORIDE AND BOTTLED WATER: Which Brands are Safe

What is Gluten & Should You Be Avoiding it?